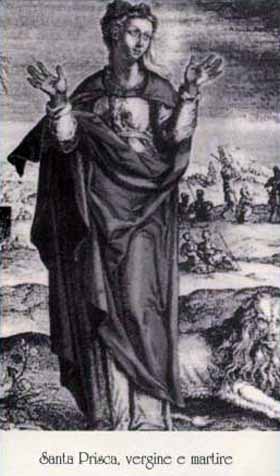 She was a martyr of the Roman Church, whose dates are unknown. The name Prisca or Priscilla is often mentioned by early authorities of the history of the Church of Rome. The wife of Aquila, the pupil of St. Paul, bore this name. The grave of a martyrPrisca was venerated in the Roman Catacomb of Priscilla on the Via Salaria. The place of interment is explicitly mentioned in all the seventh-century itineraries to the graves of the Roman martyrs (De Rossi, "Roma sotterranea", I, 176, 177). The epitaph of a Roman Christian named Priscilla was found in the "larger Catacomb", the Coemeterium maius, on the Via Nomentana, not far from the Catacomb of St. Agnes [De Rossi, Bull. di arch. crist. (1888-1889), 130, note 5]. There still exists on the Aventine a church of St. Prisca. It stands on the site of a very early title church, the Titulus Priscoe, mentioned in the fifth century and built probably in the fourth. In the eighteenth century there was found near this church a bronze tablet with an inscription of the year 224, by which a senator named Caius Marius Pudens Cornelianus was granted citizenship in a Spanish city. As such tablets were generally put up in the house of the person so honoured, it is possible that the senator's palace stood on the spot where the church was built later. The assumption is probable that the Prisca who founded this title church, or who, perhaps as early as the third century, gave the use of a part of the house standing there for the Christian church services, belonged to the family of Pudens Cornelianus. Whether the martyr buried in the Catacomb of Priscilla belonged to the same family or was identical with the founder of the title church cannot be proved. Still some family relationship is probable, because the name Priscilla appears also in the senatorial family of the Acilii Glabriones, whose burial-place was in the Catacomb of Priscilla on the Via Salaria. The "Martyrologium Hieronymianum" mentions under 18 January a martyr Priscilla on the Via Salaria (ed. De Rossi-Duchesne, 10). This Priscilla is evidently identical with the Prisca whose grave was in the Catacomb of Priscilla and who is mentioned in the itineraries of the seventh century. Later legendary traditions identified the founder of the Titulus Priscoe with St. Paul's friend, Priscilla, whose home would have occupied the spot on which the church was later erected. It was from here that St. Paul sent a greeting in his Epistle to the Romans. Another legend relates the martyrdom of a Prisca who was beheaded at the tenth milestone on the Via Ostiensis, and whose body Pope Eutychianus is said to have translated to the church of Prisca on the Aventine. The whole narrative is unhistorical and its details impossible. As 18 January is also assigned as the day of the execution of this Priscilla, she is probably the same as the Romanmartyr buried in the Catacomb of Priscilla. Her feast is observed on 18 January.

There are actually three St. Priscilla’s who lived in the first few centuries of the Church – all of whom were martyrs – and two of them share the same feast day of January 18! It is the virgin martyr St. Prisca that the Church primarily celebrates today though.

Prisca was born of a noble family in Rome during the reign of Claudius II. Most likely a Christian from birth, she was arrested during the persecutions when she was a young teenager and brought before the Emperor for questioning. Despite her youth, Prisca courageously proclaimed and upheld her Catholic Faith, even though she knew that by doing so in those days was ultimately the pronouncement of her own death sentence.

She suffered terrible tortures, one of which was being taken to the arena to be devoured by wild beasts. Rather than devour her though, the lions are said to have licked her feet! Finally, she was taken outside the city walls and beheaded. Legend tells us that when she was martyred, a great eagle appeared above her and protected her body for several days until the Christians were able to retrieve it.

The young martyr was buried in the Catacomb of St. Priscilla - the catacomb named after the St. Priscilla, wife of a Roman senator, who shares the same feast day of January 18 with the child-martyr, Prisca. She is said to have opened her home near the catacomb to Christians and to have befriended St. Peter who used her home as his headquarters in Rome. She was martyred during the reign of Emperor Domitian. As an interesting fact, there is probable speculation that this St. Priscilla was a family relation of the child-martyr St. Prisca, who is buried in her catacomb.

The third St. Priscilla was a disciple of St. Paul and wife of the Jewish tentmaker, Aquila. 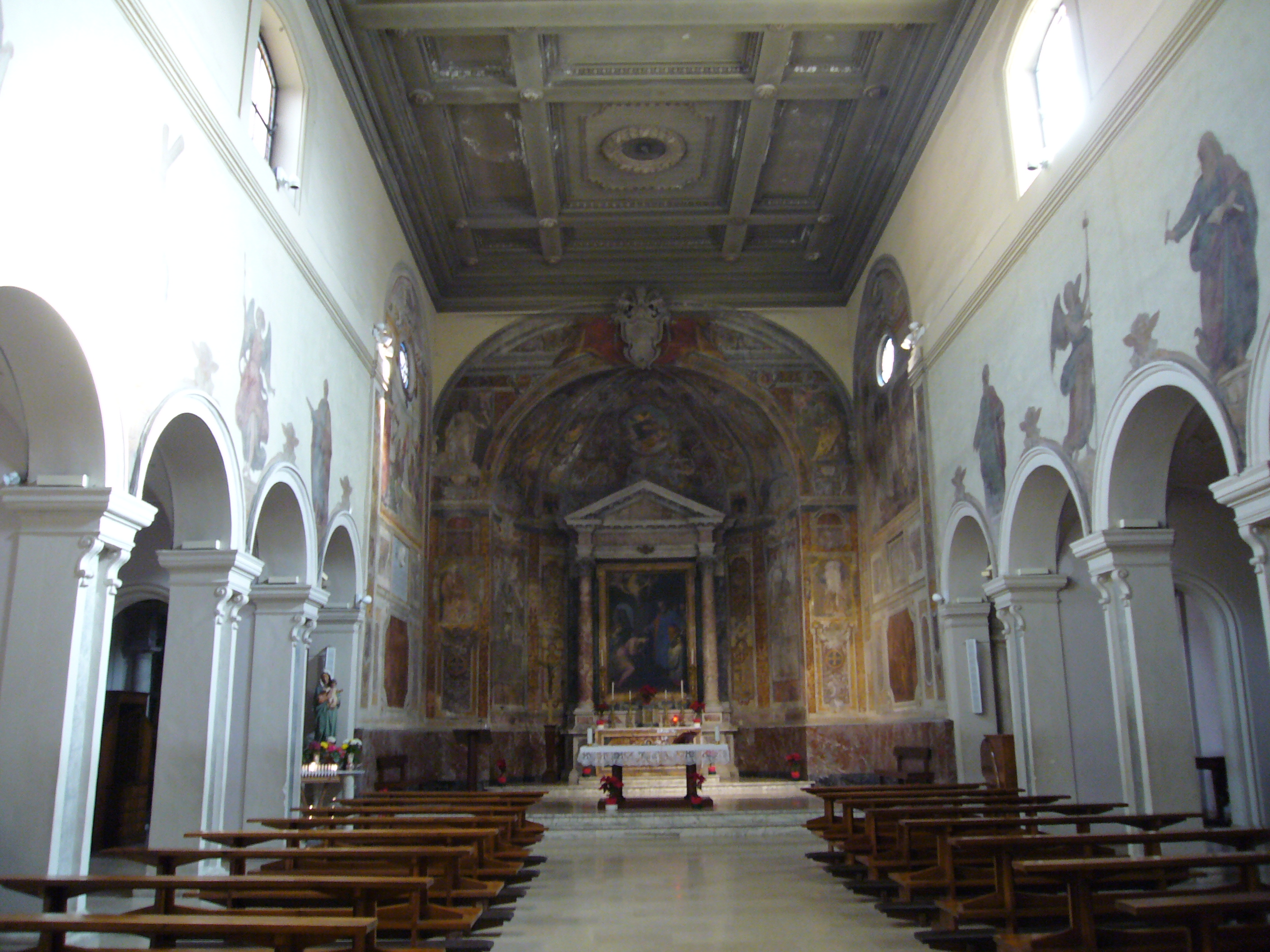 SHE was a noble Roman lady, and after many torments finished her triumph by the sword, about the year 275. Her relics are preserved in the ancient church which bears her name in Rome, and gives title to a cardinal. She is mentioned in the sacramentary of St. Gregory, and in almost all western Martyrologies. The acts of her martyrdom deserve no regard: St. Paul, in the last chapter of his epistle to the Romans, salutes Aquila, a person of Pontus, of Jewish extraction, and Priscilla, whom he and all churches thanked, because they had exposed themselves for his sake. He mentions the church which assembled in their house, which he attributes to no other among the twenty-five Christians whom he saluted, and were then at Rome. This agrees with the immemorial tradition at Rome, that St. Peter consecrated an altar, and baptized there in an urn of stone, which is now kept in the church of St. Prisca. Aquila and Priscilla are still honoured in this church, as titular patrons with our saint, and a considerable part of their relics lies under the altar. Aquila and Priscilla were tent makers, and lived at Corinth, when they were banished from Rome under Claudius: she who is called Priscilla in the Acts of the Apostles, the Epistles to the Romans, and first to the Corinthians, is named Prisca in the second to Timothy. See the Roman Martyrology on the 18th of January and the 8th of July; also Chatelain, not. p. 333