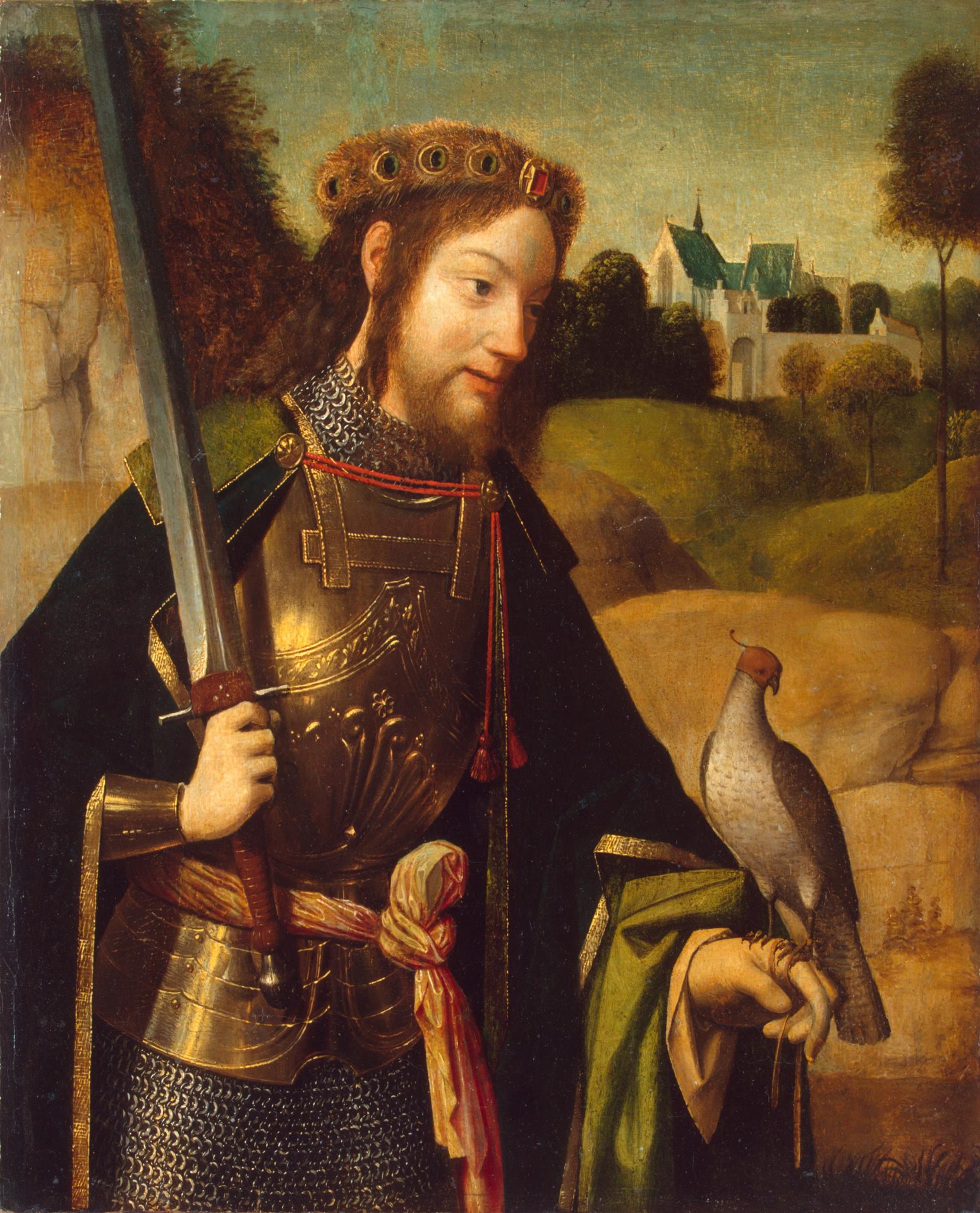 The young Bavo, christened Allowin, led a wild life as a wealthy landowner. He married and fathered a daughter; otherwise, his life was totally disordered. His sole object was to satisfy his every desire without regard to justice or truth. When he needed more money, he would sell his servants as serfs to neighboring landowners. Then his beloved wife died. Only thereafter did he realize how selfish his life had been.

Upon hearing a sermon of Saint Amandus, his heart convicted of his sin. Bavo began his conversion to Christ by giving away all his property, including his estate at Ghent which he offered to Saint Amandus, who built a monastery there. Bavo begged to enter it, and began a course of canonical penance. So great was his self-mortification that after his death the name of the abbey was changed from St. Peter's to St. Bavo's.

By great good fortune Bavo came across one man he had sold as a serf many years before. Bavo begged the man to lead him by a chain in humiliation as far as the city jail. Similar humility marked everything he now did. Saint Amandus allowed him to become his companion on missionary expeditions throughout France and Flanders, during which Bavo's personal mortifications were the wonder of all who saw them.

The austerities even of monastic life soon were not enough to satisfy Saint Bavo's desire to discipline the body that he had once over-indulged. He begged Amandus to give him permission to live as a hermit. When permission was given, at first Bavo made his dwelling in a hollow tree. Later he built a tiny cell, near Ghent in the forest of Malmédun. He lived on vegetables and water, seeing only Amandus and another friend, the saintly Abbot Floribert, until his death. He was buried at Floribert's monastery nearby, which was later renamed after him--Saint-Bavon.

So great was the impression left by Saint Bavo that 900 years later when the diocese of Ghent was created, he was made its patron (Attwater, Benedictines, Bentley, Encyclopedia).

In art, Bavo is sometimes represented as a hermit, but generally shown before his conversion: as a duke out hunting with a falcon or hawk on his wrist. He may also be shown: (1) with a purse or giving alms; (2) as a prince giving out alms in front of his palace; (3) with a sword and scepter; (4) as an old king in armor, with a book and broken tree trunk, a ship, and St. Bavo's monastery nearby; (5) with a hollow tree near him; (6) with staff and a glove; (7) near a wagon; (8) with a huge stone; or (9) with an angel holding a palm above him (Bentley, Roeder).

Saint Bavo is still venerated at Ghent and Liege, where his feast is celebrated (Roeder).

THIS great model of penance, called Allowin, surnamed Bavo, was a nobleman, and native of that part of Brabant called Hasbain, at present comprised in the territory of Liege. After having led a very irregular life, and being left a widower by the death of his wife, he was moved to a sincere conversion to God by a sermon which he heard St. Amand preach. The apostolical man had no sooner finished his discourse, but Bavo followed him, and threw himself at his feet, bathed in a flood of tears. Sobs expressed the sorrow and emotions of his heart more eloquently than any words could have done, and it was some time before his voice was able to break through his sighs. When he had somewhat recovered himself he confessed himself the basest and most ungrateful of all sinners, and earnestly begged to be directed in the paths of true penance and salvation. The holy pastor, who saw in his unfeigned tears the sincerity of his compunction, was far from flattering him in the beginning of his work, by which his penance would have remained imperfect; and whilst he encouraged him by the consideration of the boundless mercy of God, he set before his eyes the necessity of appeasing the divine indignation by a course of penance proportioned to the enormity of his offences, and of applying powerful remedies to the deep wounds of his soul, that his inveterate distempers might be radically cured, his vicious inclinations perfectly corrected and reformed, and his heart become a new creature. By these instructions Bavo was more and more penetrated with the most sincere sentiments of compunction, made his confession, and entered upon a course of canonical penance. 1 Going home he distributed all his moveables and money among the poor, and having settled his affairs, retired to the monastery at Ghent, where he received the tonsure at the hands of St. Amand, and was animated by his instructions to advance daily in the fervour of his penance, and in the practice of all virtues. “It is a kind of apostacy,” said that prudent director to him, “for a soul which has had the happiness to see the nothingness of this world, and the depth of her spiritual miseries, not to raise herself daily more and more above them, and to make continual approaches nearer to God.”

Bavo considered that self-denial and penance are the means by which a penitent must punish sin in himself, and are also one part of the remedy by which he must heal his perverse inclinations, and carnal passions. He therefore seemed to set no bounds to the ardour with which he laboured to consummate the sacrifice of his penance by the baptism of his tears, the compunction and humiliation of his heart, the mortification of his will, and the rigour of his austerities. To satisfy his devotion, St. Amand after some time gave him leave to lead an eremitical life. He first chose for his abode a hollow trunk of a large tree, but afterwards built himself a cell in the forest of Malmedun near Ghent, where wild herbs and water were his chief subsistence. He returned to the monastery of St. Peter at Ghent, where St. Amand had appointed St. Floribert the first abbot over a community of clerks, says the original author of our saint’s life. With the approbation of St. Floribert, Bavo built himself a new cell in another neighbouring wood, where he lived a recluse, intent only on invisible goods, in an entire oblivion of creatures. He died on the 1st of October, about the year 653, according to Mabillon, but according to Henschenius, 657. 2 Perier rather thinks in 654. The holy bishop St. Amand, the abbot St. Floribert with his monks, and Domlinus the priest of Turholt were present at his glorious passage, attending him in prayer. The example of his conversion moved sixty gentlemen to devote themselves to an austere penitential life. By them the church of St. Bavo was founded at Ghent, served first by a college of canons, but afterwards changed into a monastery of the holy Order of St. Benedict. It was again reduced to its primitive state, being secularized by Pope Paul III. in 1537, at the request of the Emperor Charles V. who, building a citadel in that part, three years after, transferred the canons to St. John’s, which from that time possesses the relics, and bears the name of St. Bavo. When the bishopric of Ghent was erected by Paul IV. in 1559, at the petition of King Philip II. this church was made the cathedral. Cornelius Jansenius, author of a learned Concordance or Harmony of the Gospels, and other works, was nominated the first bishop. He is not to be confounded with the famous Cornelius Jansenius, bishop of Ipres. An arm of St. Bavo is kept in a silver case at Haerlem, of which church he is the titular saint and patron, in the same manner as at Ghent. See the life of St. Bavo, written in the eighth century, published by Mabillon, sæc. 2. Ben. Another compiled by Theodoric, abbot of St. Tron’s, in the twelfth century, is extant in Surius, but not of equal authority. See also the history of many miracles, wrought by his relics, in three books. Among the moderns, Le Cointe, ad an. 649. Pagi, in Critica in Annal. Baron. ad an. 631. n. 13. Batavia sacra, p. 27. Ant. Sanderus Rerum Gandavensium, c. 4. p. 241. This author gives us the history of the church of St. Bavo, now the cathedral, l. 5. p. 390. Perier the Bollandist, from p. 198 to 303. t. 1. Octob.