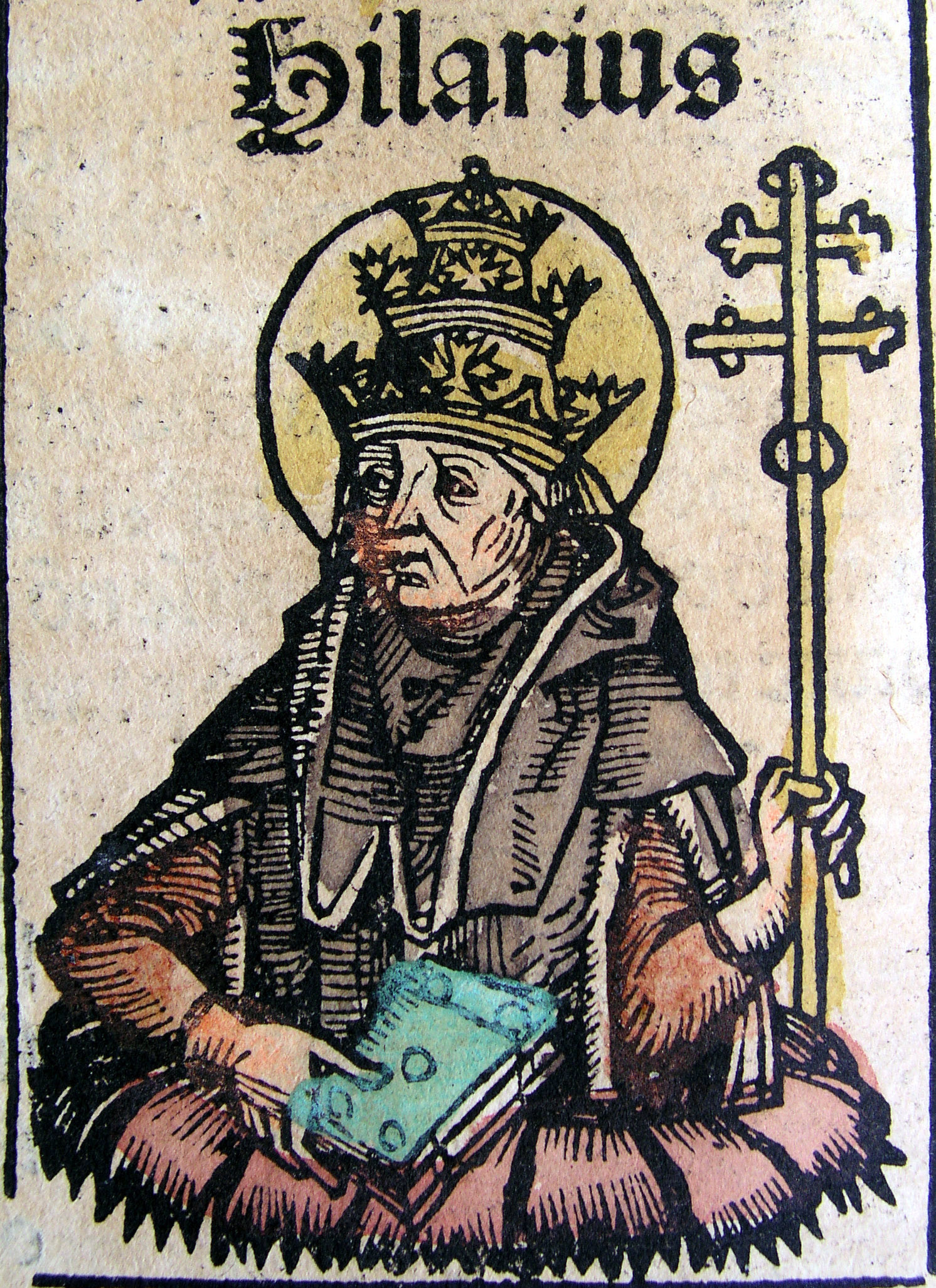 To replace a man like St. Leo the Great was not easy, but the next pope was a man after Leo’s heart, the archdeacon Hilary. Hilary was a Sardinian who had joined the Roman clergy and had been sent by St. Leo as one of the papal legates to the council at Ephesus in 449. This council, intended to settle the Monophysite affair, got out of hand. Packed with Monophysites and presided over by Dioscorus, the patriarch of Alexandria, the assembly refused to listen to the protests of the papal legates. Dioscorus steam-rollered through the council a condemnation of the orthodox and saintly Flavian, patriarch of Constantinople, and an approval of the Monophysite leader Eutyches. In vain Hilary protested. He had to fly in fear for his life and hide in a chapel of St. John the Evangelist. It was only with difficulty that he got back to Rome. No wonder St. Leo called this Ephesus council a gathering of robbers!

As pope, Hilary worked hard to foster order in the Gallic hierarchy. When a certain Hermes illegally made himself archbishop of Narbonne, two Gallic delegates came to Rome to appeal to Pope Hilary. He held a council at Rome in 462 to settle the matter. He also upheld the rights of the see of Arles to be the primatial see of Gaul. From Spain also came appeals of a similar nature. To settle these Hilary held a council at Rome in 465. This is the first Council at Rome whose acts have come down to us. According to the “Liber Pontificalis” he sent a letter to the East confirming the ecumenical councils of Nicaea, Ephesus, and Chalcedon, and the famous dogmatic letter of his predecessor St. Leo to Flavian. He also publicly in St. Peter’s rebuked the shadow-emperor Anthemius for allowing a favorite of his to foster heresy in Rome.

St. Hilary deserves great credit for his work in building and decorating churches in Rome. Of especial interest is the oratory he built near the Lateran, dedicated to St. John the Evangelist. The Pope attributed his escape from the wild Monophysites at Ephesus to the intercession of the Beloved Disciple, and to show his gratitude he built this beautiful oratory. Over its doors may still be seen the inscription, “To his deliverer, Blessed John the Evangelist, Bishop Hilary, the Servant of Christ.” Hilary built two more churches and spent freely in decorating still others. The gold and silver and marble used so lavishly by this Pope in adorning the Roman churches indicate that the wealthy families of Rome must have saved something from the grasping hands of Goths and Vandals.

Elected 461; the date of his death is given as 28 Feb., 468. After the death of Leo I, an archdeacon namedHilarus, a native of Sardinia, according to the "Liber Pontificalis", was chosen to succeed him, and in all probability received consecration on 19 November, 461. Together with Julius, Bishop of Puteoli, Hilarus actedas legate of Leo I at the "Robber Synod" of Ephesus in 449. There he fought vigorously for the rights of theRoman See and opposed the condemnation of Flavian of Constantinople (see SAINT FLAVIAN). He was therefore exposed to the violence of Dioscurus of Alexandria, and saved himself by flight. In one of his letters to the Empress Pulcheria, found in a collection of letters of Leo I ("Leonis I Epistolae", num. xlvi., in P.L., LIV, 837 sq.), Hilarus apologizes for not delivering to her the pope's letter after the synod; but owing to Dioscurus, who tried to hinder his going either to Rome or to Constantinople, he had great difficulty in making his escape in order to bring to the pontiff the news of the result of the council. His pontificate was marked by the same vigorous policy as that of his great predecessor. Church affairs in Gaul and Spain claimed his special attention. Owing to political disorganization in both countries, it was important to safeguard the hierarchy by strengthening church government. Hermes, a former archdeacon of Narbonne, had illegally acquired thebishopric of that town. Two Gallican prelates were dispatched to Rome to lay before the pope this and other matters concerning the Church in Gaul. A Roman synod held on 19 November, 462, passed judgment upon these matters, and Hilarus made known the following decisions in an Encyclical sent to the provincial bishopsof Vienne, Lyons, Narbonne, and the Alps: Hermes was to remain Titular Bishop of Narbonne, but his episcopalfaculties were withheld. A synod was to be convened yearly by the Bishop of Arles, for those of the provincialbishops who were able to attend; but all important matters were to be submitted to the Apostolic See. Nobishop could leave his diocese without a written permission from the metropolitan; in case such permission be withheld he could appeal to the Bishop of Arles. Respecting the parishes (paroeciae) claimed by Leontius ofArles as belonging to his jurisdiction, the Gallican bishops could decide, after an investigation. Church propertycould not be alienated until a synod had examined into the cause of sale.

Shortly after this the pope found himself involved in another diocesan quarrel. In 463 Mamertus of Vienne hadconsecrated a Bishop of Die, although this Church, by a decree of Leo I, belonged to the metropolitan Diocese of Arles. When Hilarus heard of it he deputed Leontius of Arles to summon a great synod of the bishops of several provinces to investigate the matter. The synod took place and, on the strength of the report given him by Bishop Antonius, he issued an edict dated 25 February, 464, in which Bishop Veranus was commissioned to warn Mamertus that, if in the future he did not refrain from irregular ordinations, his faculties would be withdrawn. Consequently the consecration of the Bishop of Die must be sanctioned by Leontius of Arles. Thus the primatial privileges of the See of Arles were upheld as Leo I had defined them. At the same time thebishops were admonished not to overstep their boundaries, and to assemble in a yearly synod presided over by the Bishop of Arles. The metropolitan rights of the See of Embrun also over the dioceses of the Maritime Alps were protected against the encroachments of a certain Bishop Auxanius, particularly in connection with the twoChurches of Nice and Cimiez.

In Spain, Silvanus, Bishop of Calahorra, had, by his episcopal ordinations, violated the church laws. Both theMetropolitan Ascanius and the bishops of the Province of Tarragona made complaint of this to the pope and asked for his decision. Before an answer came to their petition, the same bishops had recourse to the Holy Seefor an entirely different matter. Before his death Nundinarius, Bishop of Barcelona, expressed a wish thatIrenaeus might be chosen his successor, although he had himself made Irenaeus bishop of another see. The request was granted, a Synod of Tarragona confirming the nomination of Irenaeus, after which the bishopssought the pope's approval. The Roman synod of 19 Nov., 465, took the matters up and settled them. This is the oldest Roman synod whose original records have been handed down to us. It was held in the basilica ofSanta Maria Maggiore. After an address of the pope, and the reading of the Spanish letters, the synod decided that the church laws must not be tampered with. In addition to this Hilarus sent a letter to the bishops ofTarragona, declaring that no consecration was valid without the sanction of the Metropolitan Ascanius; and nobishop was permitted to be transferred from one diocese to another, so that some one else must be chosen forBarcelona in place of Irenaeus. The bishops consecrated by Silvanus would be recognized if they had been appointed to vacant sees, and otherwise met the requirements of the Church. The "Liber Pontificalis" mentions an Encyclical that Hilarus sent to the East, to confirm the Oecumenical Councils of Nicaea, Ephesus, andChalcedon, and the dogmatic letter of Leo I to Flavian, but the sources at our disposal furnish us no further information. In Rome Hilarus worked zealously for the integrity of the Faith. The Emperor Anthemius had a favourite named Philotheus, who was a believer in the Macedonian heresy and attended meetings in Rome for the promulgation of this doctrine, 476. On one of the emperor's visits to St. Peter's, the pope openly called him to account for his favourite's conduct, exhorting him by the grave of St. Peter to promise that he would do all in his power to check the evil. Hilarus erected several churches and other buildings in Rome. Two oratoriesin the baptistery of the Lateran, one in honour of St. John the Baptist, the other of St. John the Apostle, are due to him. After his flight from the "Robber Synod" of Ephesus, Hilarus had hidden himself in the crypt of St. John the Apostle, and he attributed his deliverance to the intercession of the Apostle. Over the ancient doors of the oratory this inscription is still to be seen: "To St. John the Evangelist, the liberator of Bishop Hilarus, aServant of Christ". He also erected a chapel of the Holy Cross in the baptistery, a convent, two public baths, and libraries near the Church of St. Laurence Outside the Walls. He built another convent within the city walls. The "Liber Pontificalis" mentions many votive offerings made by Hilarus in the different churches. He died after a pontificate of six years, three months, and ten days. He was buried in the church of St. Laurence Outside theWalls. His feast day is celebrated on 17 November.

Deacon. Trusted aide to Pope Saint Leo the Great. Papal legate. Sent to“Robber Synod” at Ephesus in 449 to report on the Monophysitismheresies of Eutyches, which denied the humanity of Christ and claimed that He had only a divine nature, a teaching condemned in 451 by theCouncil of Chalcedon. Eutyches’ followers attacked the legate party, and forced them to return to Rome. Arch-deacon c.455. Worked on an updated method of calculating the date ofEaster. Chosen 46th pope in 461.

As pope, Hilary confirmed the work of several general councils, rebuilt and remodeled many churches, fought Nestorianism and Arianism, and held several Councils at Rome. Renowned for defending the rights of hisbishops while exhorting them to curb their excesses and devote themselves more completely to God. Helped define the Church‘s role in the empire, and affirmed the position of the pope, and not the emperor, as leader in spiritual matters. He continued Leo I‘s vigorous policy, strengthening ecclesiastical government in Gauland Spain. Erected churches, convents, libraries, and two public baths, and his synod of 465 is the earliest Roman synod whose records are extant.

Hilary; Hilarus. Reigned from 461 to 468. Born Sardinia; died Rome,Italy. He attended the “Robber Synod” of Ephesus, 449, as a legate and upheld the rights of the papacy until Dioscurus of Alexandria forced him to flee. As pope he continued Leo I’s vigorous policy, strengthening ecclesiastical government in Gaul and Spain. He erected churches, convents, libraries, and two public baths, and his synod of 465 is the earliest Roman synod whose records are extant.