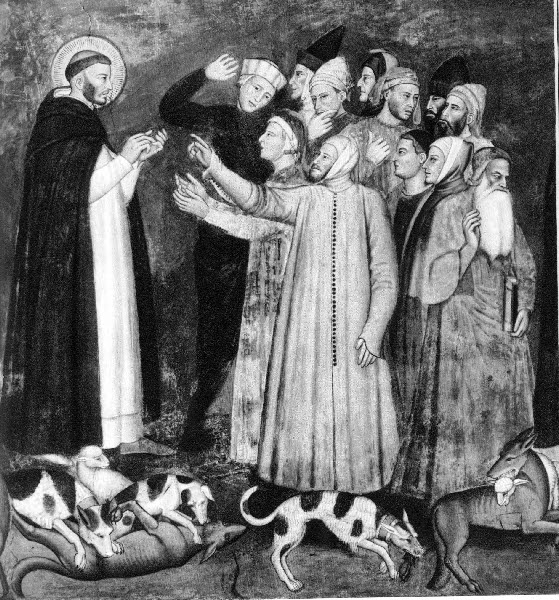 Born at Romans, Dauphiné, France, in 1193; died there in 1277. The contribution of Humbert of the Romans to Dominican life can never be overestimated. While he has never been formally beatified, he has been given the popular title of "blessed" since his death. His name is associated with the foundation of the order and the clarification of its rule and constitutions, which reveals the sure touch of his saintly and logical mind.

Humbert came from a large family, several of whom became religious; one of them was a Carthusian. He met the Dominicans at the University of Paris, where he was teaching on the faculty of arts and studying theology in 1224.

There is a charming story concerning his choice of a vocation to the Dominicans. He was kneeling one day in the cathedral of Notre Dame during the Office of the Dead being chanted by the canons. His mind kept wandering to the choice of a vocation, for his family had been friendly with the Carthusians for many years, and his brother had already joined them.

As he debated with himself, an old priest wandered down from the choir and engaged him in quiet conversation. He asked Humbert where he came from, and Humbert replied that he was a parishioner. The old priest regarded him shrewdly and said, "Do you remember what you promised at your baptism--to renounce the devil and all his pomps? Why don't you become a Friar Preacher?"

Humbert could hardly keep his mind off the priest's words, and at the responsory for the lesson, "Where shall I fly if not to You?," he decided once and for all that he would become a friar. He went to consult with his professor of theology, Hugh of Saint Cher, who was planning to become a Dominican himself as soon as he could arrange his affairs. On the feast of Saint Andrew, Humbert knelt at the feet of Blessed Jordan of Saxony and asked for the habit of the Dominicans.

The first task of the new brother was teaching at Lyons. His profound knowledge of Scripture recommended him for the highest teaching posts in the order. In 1240, when he was elected provincial of Lombardy, he began his administrative career.

From that time until his death, there was scarcely an event of any importance to the order in which he did not play a part. As provincial of France, from 1244 to 1254, he worked steadily to stabilize relations of the order and the university, perhaps foreseeing that there would one day be a showdown between the two great forces there. He was offered the patriarchate of Jerusalem, which he refused, and at the election of Gregory IX he received nearly enough votes to be elected pope.

Humbert was a careful canonist, and he carried around a master copy of the Dominican Constitutions in order that a copy could be made in the various houses. In his time the order had begun to feel the need for uniformity more than ever before, for its members were spreading to the far parts of the earth, and local regulations differed.

This was nowhere more clearly seen than in the liturgy, which differed not only with each diocese but with each basilica. When the brethren of various provinces got together for a general chapter, it was harrowing to try to chant the office. Humbert, along with several others, was appointed to begin work on a unification of the liturgy, even before he became master general in 1254. After his election as the fifth master general of the order, he intensified his efforts in this behalf.

Most of the regulations of the Dominican liturgy that have come down to us are in the words of Humbert. His principal contribution appears to be the unification of the liturgy. He set up a norm and insisted that all the varying elements conform to it, apologizing to the brethren meekly for the fact that some of them would be disappointed in the forms chosen ("since one cannot please everyone").

Many distinguishing features of the Dominican Mass can trace their definite form to this talented and sincere man who devoted his energies to the quiet task of building a structure that would wear through the centuries.

The dignity and clarity of the Dominican Constitutions likewise owe a debt to this man who wrote so clearly and unequivocally of the spirit that Dominic had left to his children, and which was in Humbert's day just being recorded for posterity. Humbert was also successful in the development of the foreign missions, and in the definitive planning of the studies of the Dominicans (Benedictines, Dorcy).


Fifth master general of the Dominican Order, b. at Romans in the Diocese of Vienne about 1194; d. 14 July, 1277 or 15 January, 1274, at Valence. He is mentioned as a student at Paris in 1215. In 1224 he entered the Order of St. Dominic, was professor of theology at the school of his order at Lyons in 1226, and prior at the same place from 1236 to 1239. In 1240 he became provincial of the Roman, and in 1244 of the French province of Dominicans. After holding the latter office ten years he was elected master general of his order at the general chapter held at Budapest in 1254. In 1263 he voluntarily resigned this office at the general chapter held in London, and retired to the monastery of Valence where he spent the rest of his life. During his generalate the liturgy of the Dominican Order received its permanent form. Humbert's humility did not permit him to accept the Patriarchate of Jerusalem, which was offered him after he had resigned as master general. He is the author of various ascetical treatises, some of which were collected and edited by Berthier: "Opera B. Humberti" (2 vols., Paris, 1889). In a treatise entitled: "Liber de tractandis in concilio Lugdunensi 1274" he severely criticizes the faults of the clergy. Parts of it were edited by Martène in "Veterum Script. et monument. ecclesiasticorum et dogmaticorum ampl. collectio" (Paris, 1724-33), VII, 174-98.

Humbert of Romans (Humbertus de Romanis, c.1200-1277), the fifth master general of the Order of Preachers, 1254-1263. Humbert was born at Romans-sur-Isère in south-eastern France (c.80 kms south of Lyons). As a young man, he went to Paris to study theology and canon law, becoming a Master of Arts before joining the Order of Preachers in 1224. In 1226, Humbert was appointed lector of theology for the convent in Lyons, for which he was conventual prior in 1237. Around 1238, he was elected prior provincial for the province of Romana, he received several votes at a papal election in 1241, in 1244-45 he was elected prior provincial of Francia, and finally, in 1254, the general chapter elected him master general of the Order. During his generalate, which lasted to 1263, Humbert contributed significantly to a re-organization and homogenization of the Order, an improved relation to the Franciscan Order, and a joined mendicant defense against their many secular critics. After leaving the office of master general in 1263, he went back to his old convent of Lyons, where he continued his series of numerous writings. Humbert died on 14 July 1277 and was buried in Valence (near Romans). He became venerated as Blessed within the Order, but was never officially beautified.


Humbert has left us a number of written works of various kinds. These include a commentary on the Rule of St. Augustine and the Dominican constitutions (Exposito regulae beati Augustini Episcopi et super constitutiones fratrum praedicatorum), a treatise on the formation of preachers (De eruditione praedicatorum), supplemented with a series of model sermons, a treatise on the various officials in Dominican convents (Instructiones de officiis ordinis), a manual for preachers of the crusade (De predicatione crucis contra Saracenos), a short comment on the ways in which the brethren were bound by Dominican constitutions and decrees (Epistola de regularis observantia disciplinae), and finally the work Opus tripartitum with competent analyses of the state of the Western Church, relations between Greeks and Latins, and conditions of the Holy Land. Humbert also functioned as collector and publisher of earlier Dominican material, such as Fr. Gerald de Frachet’s famous “Life of the Brethren” (Vitae fratrum) and a Legenda sancti Dominici.

De predicatione crucis contra Saracenos (“On Preaching the Cross against the Saracens”).

Written by Humbert soon after the Saracens had taken Sephed in 1266 as a tool of assistance for the friars, whom the pope had commisioned to preach a new crusade to the Holy Land. In 46 chapters, Humbert prepares the friars for the task and provides them with ideas and materials for their sermons. Apparently, the crusade preaching manual was still considered highly valuable in fifteenth-century Germany. A summary is published by Lecoy de la Marche in “La prédication de la croisade au XIIIe S.”, Revue des questions historique vol. 48 (1890), 5-28.


Humbert of Romans, Fifth Master General of the Order of Preachers.TREATISE ON PREACHING. Translated by the Dominican Students Province of St. Joseph Edited by WALTER M. CONLON, O.P. : http://dominicanidaho.org/humbert.html